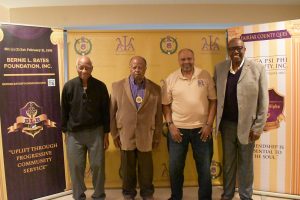 On December 26, 2019, the Brothers of Psi Alpha Alpha (PsiAA) Chapter, Third District, Omega Psi Phi Fraternity, Inc. celebrated our 39th Chapter anniversary at Brother Chisolm’s residence in Virginia. Brothers came together for an evening filled with enthusiasm, fellowship, and rejoicing to have been blessed with yet another tremendously successful year for the chapter. The chapter continues to maintain its duty to operate in true Omega spirit and excellence.  This is done both in honor of our illustrious fraternity and the 13 PsiAA chapter charter members who laid the groundwork as the chapter continues to provide service to the Fairfax County community. An acknowledgement highlighted when the chapter was honored with third place for Third District Large Chapter of the year award respectfully.

Basileus Eric Kelly and Vice Basileus W.J. Williams, Jr. offered Brothers a few inspirational words and thanks to all for coming out. On this occasion, Brothers in attendance were giving the opportunity to provide some history related to the chapter along with any other insights they might like to mention regarding their walk in Omega. Charter members Brothers Isiah E. Barnwell, M. Barnwell, and C. Brown expressed significant knowledge of the chapter’s history and vision of the charter members. Other Brothers Charles Latten, Charles Sias, Donald Glover, Jerry Hubbard, and Oscar Dailey answered the call and spoke as Brothers listened attentively. Some of the comments were memorialized on video by the Chapter Reporter (Calvin Beidleman). The purpose for creating the videos is to provide current and future Brothers the opportunity to become better acquainted with chapter and Omega history while also understanding the aspirations and vision of the thirteen founding members of PsiAA Charter members and others who have walked similar paths.

The celebration was well attended as Brothers found themselves in continuous fellowship and breaking bread. It was evident that Brothers remain grateful for another successful year filled with the continued development of lifelong friendships with other men of Omega. The PsiAA Brothers continue to stand upright, ready, and eagerly await 2020. The road to 40. 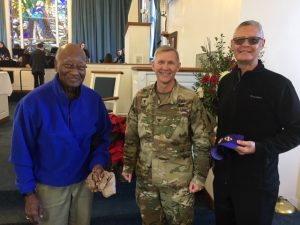 Both donations were made on December 19, 2019, by our Basileus Emeritus Marion “Barney” Barnwell and Brother Kenneth Younger, Social Action Coordinator.  The Shoppers gift cards were presented to Jacob Berenbroick, Program Director, Department of Neighborhood and Community Services, at the Gum Springs Community Center and were won by a raffle at the senior citizens holiday luncheon held that day. 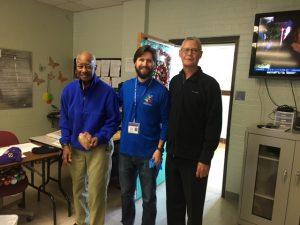 The second presentation was made to U.S. Army Chaplain (Colonel) Robert Hart, the Installation Chaplain, Fort Belvoir, Virginia.  Chaplain Hart will ensure deserving military families receive the $300.00 in commissary gift cards through the chaplaincy so that they, too, can enjoy a more joyous Christmas season.

As the Brothers of Psi Alpha Alpha Chapter celebrate the birth of Jesus Christ in 2019, we are humbled as we “uplift” others this Christmas. 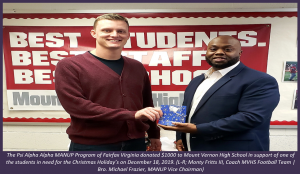 On December 18, 2019, the Brothers of Psi Alpha Alpha (PsiAA) Chapter, Third District, Omega Psi Phi Fraternity, Inc. joined together to ensure a youth and his family has something for the holiday, since he lost his mother. The Brothers of Psi Alpha Alpha generously donated $1,000 to a worthy MVHS student and family in need of uplift. The MANUP Program services the MVHS Majors in conducting a speaking series throughout the scholastic year and sponsors a 10-week study hall program for 90+ students on the MVHS Football teams from freshman to varsity.

The MANUP Program mentorship program started its partnership with MVHS in January of 2019. The program has since provided over 20 series of speaking events and activities for the young students in Fairfax County to learn and establish friendships with college educated professionals while establishing a professional network. The MANUP Program has over 40 students currently within MVHS.

It is well to give when asked, but it is better to give unasked, through understanding;
And to the open-handed the search for one who shall receive is joy greater than giving.
And is there aught you would withhold?
All you have shall someday be given;
Therefore give now, that the season of giving may be yours and not your inheritors'.

See first that you yourself deserve to be a giver, and an instrument of giving.
For in truth it is life that gives unto life while you, who deem yourself a giver, are but a witness. 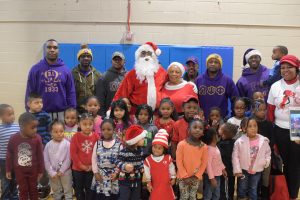 This important project that supports those less fortunate along the Route 1 Corridor, brings the holiday experience to deserving families and children who might not otherwise have a traditional, joyous holiday.  The party is possible due to a tremendous partnership between Fairfax County Neighborhood and Community Services, Gum Springs Community Center, Gum Springs Community Center Advisory Board, Fairfax County Fire Department, and of course Psi Alpha Alpha Chapter.

So, what’s involved?  The brothers of Psi Alpha Alpha Chapter arrived early to prepare the snacks and then, assisted in the opening ceremony, helped as the children of all ages created Christmas crafts, received their gifts, and ended with a visit and photo with Santa.  And you guessed it, we provided the Santa.  In addition, the Chapter purchased and donated nearly $1,000 worth of toys that consisted of six bicycles, and 20 gifts for young girls and 20 gifts for young boys.  Our holiday gifts were made relevant since they were gift wrapped by the senior citizens who participate in the Seniors Outreach Program at the community center.

The Party started at 2:00 p.m., with the children and parents in the gym for the official program and where 22 bicycles were given away by a raffle.  Also, the program included a Christmas carol sing-along.   Following the raffle, the families were directed to four arts and crafts rooms by age, and during the arts and crafts activities, the children were escorted to have pictures taken with Santa Claus.

The finale was when the kids were called by age group and lined up and received a gift-wrapped toy from Santa Claus and his Elves in the Gift room.  The beaming smiles on the children’s faces with their new toy made this uplifting event worthwhile and extremely rewarding for the chapter brothers who participated.

This year’s effort was led by Mr. Jacob Berenbroick, Program Director, Department of Neighborhood and Community Services, Gum Springs Community Center, and our own Brother Marion “Barney” Barnwell.  As a bonus, Mrs. Jimi Barnwell, wife of Bro. Marion "Barney" Barnwell, birthday club donated 15 gifts in lieu of her usual birthday present.  Psi Alpha Alpha Chapter was an integral part of the program’s success and we were proud to touch the lives of so many as we celebrate the world’s greatest gift – the birth of Christ.  Merry Christmas!

Every month, on the second Saturday, the Brothers of Psi Alpha Alpha (PsiAA) Chapter, Third District, Omega Psi Phi Fraternity, Inc. gather at the Capital Area Food Bank (CAFB) in Lorton, VA (6233 Hill Park Dr., Lorton, VA 22079) to engage in a little fellowship while working to do our share to help the less fortunate in our area.

At the Food Bank, at the direction of the workers there, we pack donated food items into bags that are then sent out to those in our community who are in need. This month the men of PsiAA, along with numerous volunteers, between the hours of 8:15am – 11:15am packed 1,350 bags filled with cooking oil, lentils, and oatmeal meal.

The CAFB is the largest organization in the Washington Metro area that is working to solve hunger and a lack of nutrition.  Psi Alpha Alpha is one of the many community organizations that partners with them and we have been doing so for more than twenty years.  The CAFB is helping 540,000 people each year, to get access to good, healthy food.

Brother Barney Barnwell has been leading the efforts to work with the CAFB from the beginning.  Psi Alpha Alpha always has a strong turnout and more than twenty Brothers were again in attendance this month.

Of all the things that our chapter does, this is one of the most rewarding, as we know that our hard work will translate to providing a true necessity to those in our region who are most in need.