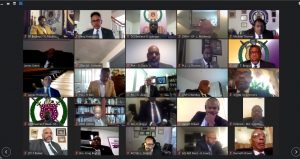 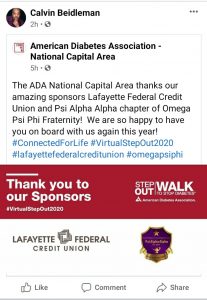 On Sept 26, 2020 from 8am to 11am, the Psi Alpha Alpha Chapter, Third District of Omega Psi Phi Fraternity, Incorporated participated, sponsored, raised and donated $1,000. This year, the event was hosted virtually due to the current COVID and social distancing environment. The American Diabetes Association requested and encouraged all participants to get out and walk, run, or bike 3.4 miles. If unable to walk, run, or bike, participants were encouraged to move around / perform some activity to support and bring awareness to the efforts to fight diabetes. Brother Calvin Beidleman created and submitted video conveying the chapter's support of the Diabetes Association and encouraging everyone to teach and take one to the walk to help increase the number of supporters to fight diabetes. The reason for the brothers participating in this worthwhile event was to raise awareness in the community about diabetes, support life-saving research, help those being discriminated against as result of being diagnosed with diabetes, as well as an opportunity to fellowship with others during a healthy activity.

As of Sept 27, they raised $125,000 with 353 participants and 47 teams. Throughout the virtual event, there were several videos displayed via the American Diabetes Association's Facebook page highlighting various participants engaged and encouraging others to join the fight. This continues to be a worthwhile and worthy event.

On September 12, 2020, the Brothers of Psi Alpha Alpha Chapter, Third District Omega Psi Phi Fraternity, Inc. provided their service to the community by leading the effort in participating at the Capital Area Food Bank in Lorton, Virginia. There were 8 Brother and 2 volunteers who enjoyed an early Saturday morning giving back. As the music played throughout the morning, everyone enjoyed the old / new school tunes. The event was a huge success as we were able to package 1,006 bags filled with Pork, peanut butter, veg.soup, tomato soup, cream of mushrooms soup, and Tasteeos cereal.

On September 15, 2020, the Psi Alpha Alpha Chapter, Third District of Omega Psi Phi Fraternity, Inc. and the Bernie L. Bates Foundation, Inc., have joined forces to make a positive impact on the First Responders in Fairfax, County, Virginia, as a result of COVID-19. The Chapter’s Basileus (Brother Eric Kelly, Sr.) and the Foundation’s President (Brother Richard Morris) donated the fifth of five monthly contributions to Rx Catering – DC Metro. The fifth check for $1,000.00 was presented to Ms. Cheron Burns, owner, of Rx Catering at Greenspring Continuing Care Retirement Community, Springfield, Virginia. At the same event, Rx Catering donated 125 meals to Ms. Chandra Kumar, Executive Director of the Garden Ridge Complex for the nurses, staff, and residents. Other Chapter and Foundation attendees were Brothers W.J. Williams, Jr., Marvin Chisolm, and Kenneth Younger. As this joint COVID-19 effort comes to an end, we look forward to similar support in the coming fiscal year.