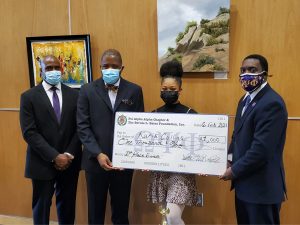 Due to the unprecedented times that our world is currently facing with the COVID-19 pandemic, the Psi Alpha Alpha Annual Talent Hunt Competition looked much different than previous years.  For the first time ever, the Brothers of Psi Alpha Alpha conducted a Virtual Talent Hunt on February 6, 2021.  “It couldn’t be done….” they say, - but with hard work and perseverance, we upheld our Fraternity’s aim by giving the youth in our community a platform to display their talents.

As the virtual curtains opened, the program began at 11am in front of a supportive audience of almost 100 people to include Brothers, family, and friends eager to support a great group of kids displaying their talents in the performing arts.  The showcase, which was attended and recorded via Zoom, featured 10 extremely talented high school students from across the DMV area.  Performances included dance, instrumentation, and vocal renditions.  The collaborative efforts of the Talent Hunt committee yielded a showcase that will be long remembered by the participants, their families, and friends.

This year’s Master of Ceremony was Bro. Darren Haynes (Epsilon Iota Iota '03).  A graduate of Wayne State University earning a BA Degree in Media Arts and Studies, the Emmy award-winning sports anchor is currently the Sports Director and Main Sports Anchor at WUSA in Washington D.C.  Prior to joining WUSA, he anchored for ESPN’s flagship program, Sports Center.  Over his career he has covered major sporting events to include the Super Bowl, NBA Finals, Stanley Cup Finals, NASCAR Cup Series Championship, and the World Series.  He worked collaboratively with the committee to facilitate an informative, entertaining, and interactive event.  Bro. Haynes motivated and encouraged the performers as well as kept the audience engaged by providing historical facts about the fraternity, its mandated programs, and the numerous community service activities that Psi Alpha Alpha is involved in throughout the year.

With an extremely close competition this year, the judges had an arduous task selecting a winner but just like our student competitors, they too stepped up to the challenge. This year’s judges were Ms. Christie J. Blackmon, - an accomplished and professionally trained vocalist who had the honor of being requested to sing at a Northern VA rally during President Barack Obama’s initial campaign; Mrs. Stacey Y. Claytor – CEO and Founder of C4 Performing Arts Academy in Fairfax, VA; and Dr. Michael Nickens, Associate Professor of Music and Director of the Green Machine Jazz Band Ensemble at George Mason University.

All the competitors performed admirably and received a certificate of appreciation from the chapter and a monetary prize from the Bernie L. Bates Foundation.  The following students delivered performances that surpassed all others earning them the rankings of first, second and third place winners.  Taking the grand prize of $1000 and winning first place was Miss Karis Collins, dancer and senior at Wakefield High School.  Winning the second place $500 prize was Mr. Lawrence Wingfield, pianist and junior at Bishop McNamara High School.  In a rare feat, there was a tie for third place between Miss Azariya Bates, dancer and sophomore at KIPP College Preparatory School and Miss Chamir Yarborough, dancer and freshman at Duke Ellington School of the Arts.  Both third place winners received trophies and the prize amount of $250 each.

Our winner, Miss Karis Collins, a 17-year-old honor student and member of the National Honor Society and Black Student Union, wowed the audience and judges with her dance presentation of “Swan Lake: Odette Variation” by Pyotr Tchaikovsky.  Karis’ hobbies include dancing, singing, reading, painting, arts & crafts, piano, and community service projects.  She is an athlete excelling in Outdoor Track (High Jump) and a three-year Varsity Cheerleader.  An active member of Grace Community Church in Arlington, Virginia, Karis is well aware that her gifts truly come from God.

Karis will proudly represent Psi Alpha Alpha at the Virtual Talent Hunt Competition during the 88th annual 3rd District Meeting on Saturday, May 22, 2021.

The 2021 marquee event for Association for the Study of African American Life and History (ASALH) was a virtual event that featured “A Conversation with Dr. Henry Louis Gates and Dr. Evelyn Higginbotham.” The 95th Annual Black History theme is The Black Family: Representation, Identity, and Diversity.

One of the highlights of the evening was the celebration of the latest release in the Black Heritage Stamp Series. On January 28, 2021, the August Wilson Black Heritage Stamp was unveiled. Wilson was an American playwright, considered a literary trailblazer. His play, “Fences”, set in the 1950s explored the evolving African American experience and examined race relations, among other themes. The play won the 1987 Pulitzer Prize for Drama and the 1987 Tony Award for Best Play. Wilson’s play, “The Piano Lesson,” was also a Pulitzer Prize winner.

The primary focus of this virtual marquee event was Dr. Gates’ commentary. He mainly discussed the genesis of his PBS show, “Finding Your Roots…” and his views on the importance of the Black church. Dr. Gates’ curiosity about family lineage stemmed from his grandfather being exceptionally light skinned with straight hair. He could not figure out how he was the descendant of a grandfather that looked so different than he did. In later years, with the advent of new DNA testing essentially in a tube, Dr. Gates set out to deliver to the average American the type of extensive family lineage revealed by Alex Haley in “Roots.”

Dr. Gates proclaimed the Black church was the oldest, first, and most continuous institution, since 1773, for black American families. The 1773 date establishes the Black church 3 years prior to the Revolutionary War of 1776. He recognized the church as the birthplace of every social, educational, political, and artistic form in our community. It was a “cultural laboratory.” He alluded to the black church being the “Wheel in the Middle of the Wheel” as stressed in the book of Ezekiel.

As an aside, Dr. Gates stressed that even in this digital age, it is important to label hard-copy photographs with names so that young men and women and future generations will have the ability to identify who’s who in those priceless family photos.

The depth of knowledge gained during this event was immeasurable. 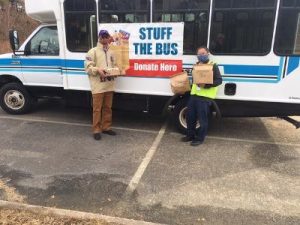 As the Nation continues to deal with the coronavirus pandemic, the Brothers of the Bernie L. Bates Foundation, Inc., and Psi Alpha Alpha Chapter again committed to uplift two important Food Pantries in Fairfax County - United Community and Koinonia, both in Alexandria, Virginia.

Stuff the Bus began in 2011 in response to a critical need to help restock the shelves of local food pantries after the holidays. In the program’s 10th year, Stuff the Bus is working to meet the increased demand for food due to the COVID-19 pandemic. Two Saturdays were selected this year and buses were parked at 22 locations throughout the county to collect nonperishable food donations for area pantries.

Since the Capital Area Food Bank Hunger Report 2020 indicated 72,460 people in Fairfax County are experiencing food insecurity, we were humbled to uplift those less fortunate. We look forward to supporting this important project in the coming years. 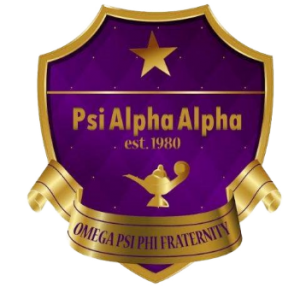