The 36th Anniversary Celebration of

In the presence of charter members Willard Jasper, Ronald Lofton, Senior, Marion Barnwell, and Isaiah Barnwell, Junior, several members of the Psi Alpha Alpha chapter gathered at the Marriott in Fair Oaks, Virginia to celebrate and reflect on the chapter’s 36th anniversary. December 26 of each year marks the founding of the Psi Alpha Alpha chapter of the Omega Psi Phi Fraternity’s existence in Fairfax, Va. Since that time, the chapter has done much to be proud of and is continually charting new plans to extend its outreach efforts in the community it serves.

This year, Brothers gathered at the Marriott hotel and lobby where it last hosted an Achievement Week after event cocktail hour for fraternity members, family, and friends alike. Those in attendance were treated to a smorgasbord of tasty food ranging from thin crust pizzas, southern Virginia peanuts, macaroni & cheese, chicken, and salad. Each Brother was asked to bring an artifact that has been instrumental in his walk in Omega and or one that reflects the founding of the chapter. One of the most important artifacts was that of the original charter itself guarded closely by that of Brother Isaiah Barnwell, Junior. It was properly placed on an easel where it could be prominently viewed by all throughout the event. Charter members Jasper, Lofton, Sr., Marion Barnwell, and Iasiah Barnwell, Jr., each shared reflective moments regarding the creation of Psi Alpha Alpha with those in attendance. Shortly thereafter, the Brothers shared their artifacts and their reflections since being in the folds of Omega. Every few minutes, the groups would rotate again to provide ample opportunities from each to learn from one another. Each of the artifacts were then placed on a table to be viewed and photographed for historical record keeping purposes. Lamps, sweaters, plaques, bricks, bibles, and hats were shown and were the catalysts to a wealth of knowledge that was shared.

The conclusion of the event provided an opportunity for the charter members to take a picture along with the other Brothers present. Psi Alpha Alpha chapter’s anniversary was one of great reflection and pride as we celebrated yet another year existence. It is vital that we honor and celebrate December 26th of each year to remind us of the significance of the moment in history. The chapter is honored to bestow chapter number 806 of the Omega Psi Phi Fraternity, Inc. as the Psi Alpha Alpha chapter of Fairfax County, Va. 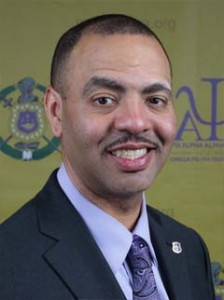 On Saturday, December 10, 2016, the Brothers of Psi Alpha Alpha Chapter, Omega Psi Phi Fraternity, Inc. gathered at the Capital Area Food Bank (CAFB) in Lorton, VA (6233 Hill Park Dr., Lorton, VA 22079) to engage in a little fellowship while working to do our share to help out those in our area who are suffering from hunger and a lack available food.

Every month, typically on the second Saturday, we gather at the CAFB to assist them in putting together food packages that are then sent out to those in need.  The locations that the Lorton Food Bank service are Annandale (the Evergreen House), Arlington (Harvey Hall, The Shelton, Hunter’s Park at Cherry Dale, Lockwood/Elmwood House, Hunter’s Woods Fellowship House) and Fairfax (United Community Ministries, Bailey’s Senior Center, Yorkville Cooperative, Lake Ann Fellowship House, Winter Hills Apartments) Virginia.

The CAFB is the largest organization in the Washington metro area that is working to solve hunger and a lack of nutrition.  Psi Alpha Alpha is one of the many community organizations that partners with them and we have been doing so for about twenty years.  The CAFB is helping 540,000 people each year to get access to good, healthy food.

Brother Barney Barnwell has been leading the efforts to work with the CAFB from the beginning.  Our Chapter always has a strong turnout and a large number of our Brothers have lent their time to this great effort.  Of all of the things that our chapter does, this is one of the most rewarding, as we know that our hard work will translate to providing a true necessity to those in our region who are most in need.

Good evening. It was breezy today, but brothers still managed to have fun. As usual, the Immediate Past Basilieus ran his one mile and critiqued runners on their correct form. Bro. Wells tried his best to complete at least 12 laps. Bro’s Twigg, Caldwell, and Floyd were slow but steady. The Fashion Award went to Bro Immediate "Past Past” Basileus Bro Wyche, who managed to wear both Dallas Cowboys and Penn State paraphernalia. The highlight of the day was the sprint to the end that was won by Bro. Jason Foreman. In the end, fun was had by all.