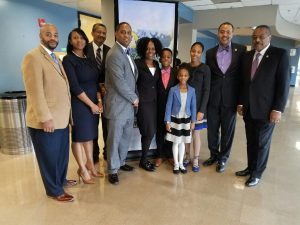 ha Alpha Chapter Brothers fellowshipped in unity at New Horizon Christian Faith Church in Woodbridge, VA. at the invitation of Psi Alpha Alpha Chaplain, Brother Cornelius Beidleman and Brother Rev. Theodore Strange, III for the Koinonia Service. The service began at 9:00 am and the Brothers had a great time of fellowship, worship, and friendship. Koinonia is a Greek word that occurs 20 times in the Bible. Koinonia's primary meaning is "fellowship, sharing in common, communion".

The next fellowship will be held on Sunday, March 12, 2017 for the NA II Memorial Service. Psi Alpha Alpha Chapter will lead this effort. The church location and time of service will be posted on the District Calendar. However, I encourage you all to plan to attend. The attire is Omega Dress (Black/Dark Blue Suit, White Shirt, Purple Tie, Black Socks and Black Shoes).

We Shall Not Be Moved March on Washington
January 14, 2017

Partnering with Reverend Al Sharpton and the National Action Network (NAN), the men of Omega Psi Phi Fraternity, Incorporated ventured into Washington, D.C. to brave the elements for a worthy cause. The We Shall Not Be Moved March on Washington was created to preserve and protect the dream of Dr. Martin Luther King Jr., and the legacy of President Barack Obama. It was only fitting to conduct such a march on the holiday weekend of Dr. Martin Luther King Jr. himself. Brothers from Omega Psi Phi were called to serve as ushers on this monumental occasion in light of the election of then President Elect Donald Trump and the continue disparities of treatment of people of color. Psi Alpha Alpha would lend a helping hand in this regard on this cold wet day of January.

Brother Harvey Woods of the Pi Lambda Lambda chapter of Omega Psi Phi called for a gathering of Brothers very near to the stage on the same grounds as the Washington Monument. There thousands
had already gathered for a pre-rally prior to the start of the march to the West Potomac Park very near to the MLK memorial. Shortly after arriving, Brother Terry Cooper and Craig Spraggins convened with
thirteen other Brothers from the second and third districts of the organization.

A representative from the National Action Network responsible for the movement of marchers from one location to another provided the purpose of the marshal and the directions required for such a role. As marshals, the men of Omega standing alongside other volunteers were to act as the flanks (left and ride) of the marching column. Beginning at 10:55, Reverend Al Sharpton moved down the sidewalk and into the marshal corridor where we began to walk from the theater to the West Potomac Park staging area for the final speeches to be delivered. Speeches begun shortly after arrival and our duties and responsibilities as marshals had concluded.

It was a gratifying experience knowing that as marshals, we provided safe passage to marches as they expressed their freedom of speech right to those in attendance. The men of Psi Alpha Alpha were
pleased to serve in such a capacity on the holiday weekend of Dr. Martin Luther King Jr.