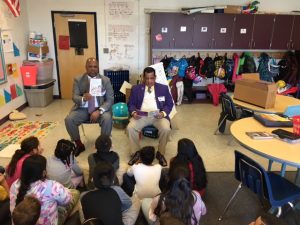 On March 13, 2019, the men of Psi Alpha Alpha (PsiAA) Chapter, Third District, Omega Psi Phi Fraternity, Inc. as a part of the “Reading for Success” program at Riverside Elementary School, the brothers of Psi Alpha Alpha Chapter conducted their Third Read-Aloud session. The brothers, known affectionately as “The Sirs,” once again, supported six third-grade classes with a total of 223 students.  We chose “Joanie’s House Becomes a Home” by Donna Latham for the reading.  The book tells the story of a young girl whose family moves from San Francisco, California to Boston, Massachusetts.  The book is told from Joanie’s point of view and explains what makes a home. Thirteen chapter brothers supported this effort and made it a success.  With today’s book donation, the program has provided 3,821 age appropriate books to the third-grade students at Riverside Elementary School this school year.  We look forward to our fourth and final reading session on June 5, 2019. 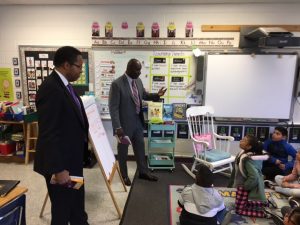 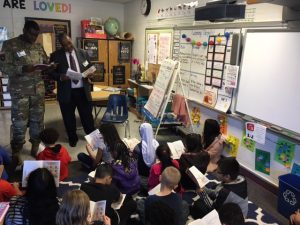 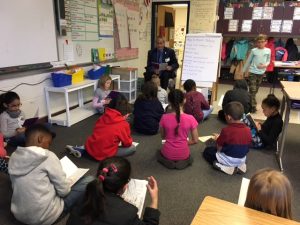 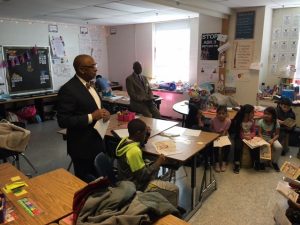 On March 9, 2019, the men of Psi Alpha Alpha (PsiAA) Chapter, Third District, Omega Psi Phi Fraternity, Inc. in collaboration with the members of The Mighty Third District, Northern Area II Chapters united for the 2019 Memorial Service at Heritage Fellowship Church 2501 Fox Mill Road, Reston, VA 20191. Omicron Kappa Kappa was the Host Chapter for this year’s event. All Chapter Chaplains assisted with the appropriate level of planning and coordinating this mandated program to honor and recall the memory of those members who have entered into Omega Chapter. One of those great brothers was our very own Brother John L. Peoples, Charter Member of Psi Alpha Alpha entered into Omega Chapter November 2018.

The event was a tremendous success again. We truly set the standard as to how joints memorial services should be conducted. Brother Emanuel Carter (PsiAA Chaplain) brought forth the first biblical reading (Psalm 30). The spiritual words empowerment was brought forth with fears enthusiasm by the great brother District Chaplin Rev. Courtney Miller. After the repast, brothers assembled at the Amphora Diner Deluxe in Herndon, VA to break bread in remembrance of our late comrades.  Sharing good times and laughs, the brothers dwelled together in unity and created great memories. Lastly, all participating chapters will receive credit for the completion of a mandated program.

On March 15, 2019, the men of Psi Alpha Alpha (PsiAA) Chapter, Third District, Omega Psi Phi Fraternity, Inc. combined their staple reclamation and retention gathering with the chapter’s biggest fundraiser. Every quarter Psi Alpha Alpha hosts its Third Fridays Event as a means to reconnect and reclaim fraternity members who may not be affiliated with a chapter or have been away from the fold. The event attracted 10 potential brothers to add to the chapter’s roles with one brother becoming financial at the event. Additionally, with the 50 current chapter members and the 150 patrons in attendance made the event a tremendous success. The NCAA raffle committee changed the format of choosing the winning tickets by utilizing a wind machine to scramble the loose ticket stubs. Four patrons were chosen and graciously agreed to enter the machine to grab the winning ticket stubs. This new format was of great enjoyment to all in attendance and helped make the event a huge success.

Tickets for the NCAA Final Four Raffle went on sale in October 2018 with the last ticket sold just minutes prior to the drawing. The money raised from ticket sales routinely exceeds $20,000 with 2019 following form. Proceeds from the raffle are awarded as scholarships for college-bound high school seniors and provide financial support for activities designed to improve the community.

This year’s raffle winners are:

On March 27, 2019, the men of Psi Alpha Alpha (PsiAA) Chapter, Third District, Omega Psi Phi Fraternity, Inc. conducted their MAN UP mentoring program by speaking to 25 students from Mt. Vernon High School in Fairfax Virginia about military, college, goal setting, aerospace, and pursuit of excellence. Speakers of this lecture series had various backgrounds and military experience that they used to engage, empower, educate, and exposed the students to different strategies for success. The speakers included Bro. LTC. Chester Keller, LTC. Louis P. Hawkins, Bro. MAJ Melake Whyte, MAJ Herbert Gamble. The MANUP mentoring program is a male mentoring program sponsored by the men of Psi Alpha Alpha of Omega Psi Phi Fraternity Inc. The MANUP program partners with Mt. Vernon High School, West Potomac High School, and Gum Springs in Fairfax Virginia and has over 60 students ranging from 6th grade to graduating seniors in their program. The program consists of mentoring students thru exposure to various careers and pre-college initiatives by way of lecture series and field trips throughout the scholastic calendar year.

Bro. LTC Chester Keller spoke to students about his humble beginnings and the level of perseverance needed to excel in life. LTC Keller is a Program Manager Acquisitions officer in the United States Army. His message to the students was centered on meeting the daily challenges and pursuit of excellence in all matters with consistent effort.  LTC Keller read two poems, ‘See It Through” by author Edgar Albert Guest and “If” by Rudyard Kipling.

Aviation and Acquisition Officer LTC Louis P. Hawkins gave an empowering oration on setting goals, dreaming big, taking action, and never giving up. He gave a personal testimony and journey of being an Aviation Officer in flying helicopters for search and rescue missions. In addition, he focused on careers in the aerospace industry and the need for more diversity for African American and Latino men and women.

Maj. Herbert Gamble spoke to students about performing, image, and exposure (PIE). His focus examined the concepts of PIE and putting forth the right energy and effort to obtain goals. In addition, Maj. Gamble spoke to students about having more than 1 goal – as life often does not work out as originally planned. Maj. Gamble serves as a Program Management Acquisitions Officer for the United States Army.

Maj. Melake Whyte currently serves as a Human Resource Officer for the United States Army. He connected to the students by using his unique background of being a first-generation American. Maj. Whyte ran track collegiately at Oregon University and later joined the military. He challenged the students to not settle on being a product from their community, but to shape their community by being leaders and doers. In addition, he also urged students to not waste their talents and to live up to all their potential in all avenues they pursue. 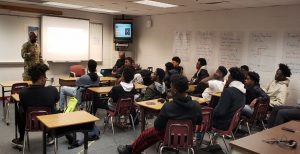 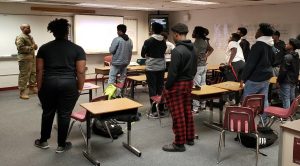 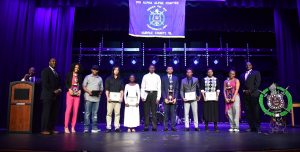 On March 16, 2019, the men of Psi Alpha Alpha (PsiAA) Chapter, Third District, Omega Psi Phi Fraternity, Inc. held an extraordinary Talent Hunt program in the beautiful auditorium of Lee High School in Springfield, VA. The curtains opened and the program began at 10am in front of a supportive audience of Brothers, family, friends, and other residents of the community eager to support a great group of enthusiastic youth displaying their talents in the performing arts.  Thanks to the Men of Psi Alpha Alpha, assisted by civic student organizations like the Beautiful and Progressive Educated Sisters (BAPES) and Powerful African-American Males about Success (PAAMAS), our collective efforts resulted in another magnificent Talent Hunt Competition.

We were privileged to have 9 great performers this year with acts ranging from vocalists, percussionist, cello player, saxophonist, and instrumentation to dance.  All of the student participants performed extremely well pleasing the crowd of newly-minted fans and “wowing” the event judges.

Our Master of Ceremony was Bro. Adimu Colón.  A graduate of Hampton University, he is an accomplished content producer, television host, radio personality, executive, philanthropist and entrepreneur.  Bro. Colón is a Spring ‘93 initiate of our great Fraternity by way of the Gamma Epsilon chapter.  As a personality, he’s hosted his own #1 rated radio shows in Washington, DC, Los Angeles, and New York.  He is the former host of the Emmy Award-winning TV show Teen Summit on BET and the recipient of two NAACP Image Awards. The WPGC weekly music radio host did an outstanding job encouraging the performers while also engaging the audience by informing them of the community activities that our chapter conducts or participates in throughout the year, general facts about our Omega Psi Phi Fraternity, Inc. and our chapter as a whole.

With an extremely close competition this year, the judges had an arduous task selecting a winner.  Unfortunately, as with every year, one winner had to be selected. Out of our talented group of young performers, Ms. Sydney Pollard took the first place honors.

Sydney hails from Dumfries, VA and is a junior at Charles J. Colgan High School. Her hobbies include cooking, traveling, and of course her passion for dancing.  Dancing since she was only 8 years old, her moves have caught the attention of many famous dancers including Debbie Allen, Eartha Kitt, and Darrell Moultrie.  She attended the Debbie Allen Summer Intensive Program in Atlanta, GA and has been recently invited to attend the Summer Intensive Program again this year in Los Angeles, CA.  After graduating from high school, she hopes to attend Virginia Commonwealth University to study Dance.  Along with her hobbies, Sydney has also been a high achiever in academics maintaining a 3.5 GPA as an ‘A’ Honor Roll student.  She gracefully captivated the judges and everyone else in attendance at our program this year with her classical dance to the music of Andra Day’s song "Rise Up”.

The other participants were: 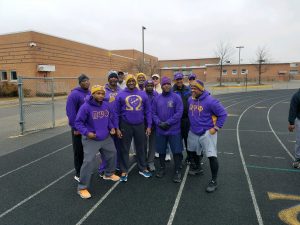 Several brothers, to include their family and friends came out to participate in this worthwhile activity. Everyone participated in one way or another (walking or jogging) and welcomed the opportunity to have a good time through fellowship while improving their health. In total, over 30 miles were walked or ran by those in attendance.

During the breakfast, everyone (brothers, family, and friends) enjoyed the fellowship as it gave them time to continue to develop, build, and strengthen their existing and budding new friendships. There was one brother who just came for the fellowship, which further demonstrates the love within this great chapter and how good and pleasant it is for brethren to dwell together in unity. 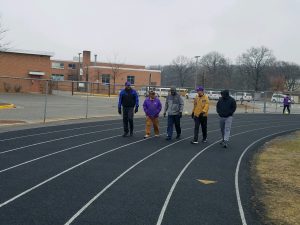 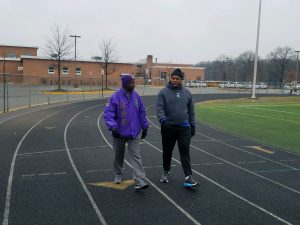 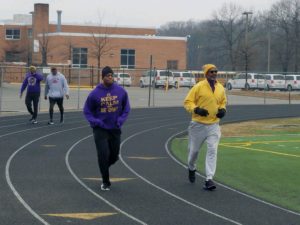 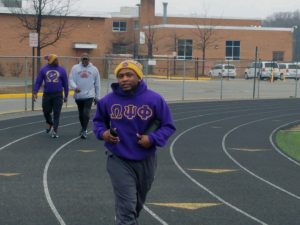 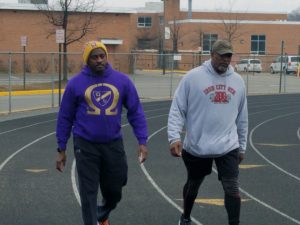 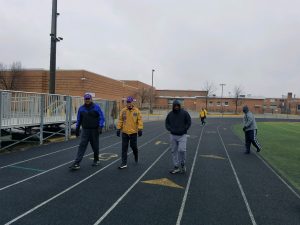