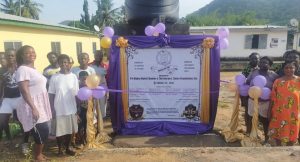 On October 27th Psi Alpha Alpha Chapter of Omega Psi Phi Fraternity, Inc. , along with the Bernie L. Bates Foundation, Inc provided payment of $4000 and the associated presentation placard to the brothers of Tau Chi Chapter in Ghana via the Omega Charities, Inc. with a ‘borehole’ (well) that is intended to support the Grand Basileus’ Water For Life initiative, which is to provide 24 boreholes supporting the townships outside of the capital city of Accra.

The placard included a verse from Isaiah 44:3-4:

“for I will pour out water on him who is thirsty, and streams on the dry ground.
I will pour out My Spirit on your offspring and My blessing on your descendants.
And they will spring up among the grass like willows by the streams of water.”

The chosen location for the sponsored borehole was Akwamufie East, the state and seat capital of the Akwamu state or kingdom. It is located along the Akuapim-Togo range, the Volta River and in the Eastern Region. It is the town where the Paramount Chief, Odeneho Kwafo-Akoto III and Queen Nana Afrakoma II reside and administer their operations.

Akwamufie East has a population of 1500 people. It is a farming community with the main crop being pineapples and other vegetables. Average medium income is $50 per month. Most people get their water from the nearby river which is also used to bathe the people as well as their livestock. This causes waterborne diseases such as diarrhea and malaria. It promotes infestation and often results in a high infant mortality rate. Access to clean water was essential to the dire public health experiences by the people in this region.

Due to rains and flooding, the commissioning ceremony was delayed until November 17, 2021. However, the excitement and appreciation from the villagers on this day, the 110th anniversary of the founding of the Omega Psi Phi Fraternity, Inc. made this occasion more special for the brothers. It was a greater joy to see that despite the challenges, the people of Akwamufie remembered to first thank God for the blessings of clean water for life.