On April 27, 2019, the men of Psi Alpha Alpha (PsiAA) Chapter, Third District, Omega Psi Phi Fraternity, Inc. partnered with Rebuilding Together to revitalize a home in Alexandria, VA., for this year’s project.  The chapter brothers have invested hundreds of hours in sweat equity in similar rebuilding projects during each of the past 31 years. This year’s project continues the spirit of providing excellent community service by way of Omega men volunteering their time, talent,  physical and skilled labor to improve the homes and living conditions of low-income families (some with physical limitations) and non-profit organizations that house and serve a vulnerable population in the chapter’s community.  Individuals who enjoy the benefits of this effort over the years through the national Rebuilding Together project now have safer, healthier and more comfortable places to live.

This year’s event involved an end unit of a two-story townhouse, requiring the entire interior to be painted; walls, ceilings and all trim work. The house consists of three (3) bedrooms, one and a half (1 1/2) baths, a kitchen and a living room.  The inside stairway walls and ceiling were also painted.  Other services provided included replacement of two toilet seats, installation of two smoke/CO detectors with 10-year batteries, and replacement of dryer flexible duct. 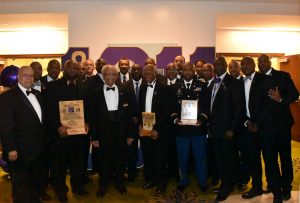 The Third District Representative conducted a well-organized and productive meeting. He provided an informative speech regarding the state and future of the Third District. District chairmen presented the committee reports accordingly. District achievement awards were presented. Psi Alpha Alpha chapter and brothers had the honor of receiving the following awards:

This was a first class event hosted by Sigma Mu Mu chapter. A great time was expressed by numerous brothers and they enjoyed the fellowship. 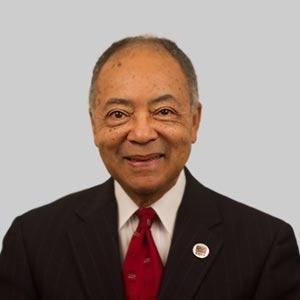 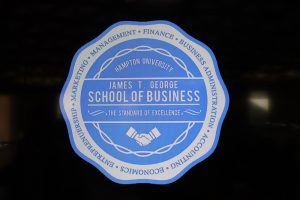 On April 11, 2019, the men of Psi Alpha Alpha (PsiAA) Chapter, Third District, Omega Psi Phi Fraternity, Inc. would like to congratulate their chapter brother Col (Ret) James T. George for having the Hampton University School of Business in Hampton, Va. named in his honor.

“Trustee James T. George truly believes in reinvesting back into his alma mater and I am just pleased that I could recommend to the Board of Trustees that we name the School of Business in his honor,” said Hampton University President Dr. William R. Harvey. “Over the years, Trustee George has given Hampton University his time and skill while serving on our board. He has also given a significant financial gift back to his ‘Home by the Sea.’ This world-class institution is honored by his continued support.”

George earned a Bachelor of Science degree in Biology from Hampton University, where he was also commissioned a Second Lieutenant in the United States Army. George went on to be one of the first African-Americans to receive an MBA from the University of Arizona. He also holds an Advanced Management Certificate from Pennsylvania State University. He is a graduate of the Armed Forces Staff College in Norfolk, VA and the Army War College in Carlisle, PA.

“It’s wonderful to leave a legacy, but what is more important here is that the students get the highest quality education possible to enable them to lead in corporate America and someday lead their own businesses,” said George. “The Hampton School of Business instills business ethics in its graduates. That is one of the reasons that I am so pleased, no – thrilled, to have my name associated with this visionary and innovative school of business. But even in super competitive environments, there is still a need for business ethics. It begins with simply telling the truth. My hope is that more graduates of this great institution will think of themselves as employers and entrepreneurs, rather than employees only.”

George founded MSTI, a small business, in 1990 after serving for 27 years as an active duty Army officer. Retiring as a Colonel, he served in a variety of infantry and comptroller positions both overseas and in the United States, including two tours in Vietnam and tours in Korea and Europe. As Assistant Comptroller of the Army for Financial Planning at the Pentagon, he led the development of the initial concept for an information system to integrate the Army's programming and budgeting process. He concurrently served as a member of the board of directors of the Army and Air Force Exchange Service (AAFES) for three years while serving as comptroller of Fort Devens, MA and subsequently, while at the Pentagon. He currently serves on the Board of Trustees of Hampton University.

MSTI was established as a management consulting company. Its current focus is information technology solutions and management solutions. The company has grown from one person to its present strength of approximately 300 employees.  Mr. George continues in the role as chairman, but has now relinquished day-to-day operations to the present CEO, Mr. Norris Middleton, who is also a Hampton alumnus.

George and his wife, Juliette, a retired Fairfax County secondary school teacher, have been married for over 50 years and have two children and two grandchildren. They currently reside in Fairfax Station, VA. 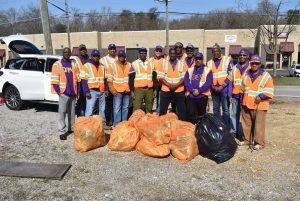 On April 6, 2019, the men of Psi Alpha Alpha (PsiAA) Chapter, Third District, Omega Psi Phi Fraternity, Inc. met to perform our first Adopt-A- Highway event of the year. Over the past several years, our chapter has collaborated with the Fairfax County Department of Transportation to help clean up litter along Alban Road in Springfield, VA.  Each year, nearly 18,000 Adopt-a-Highway volunteers collect more than 25,600 bags of waste along Virginia’s highways. The state of Virginia estimates that our assistance contributes to saving the commonwealth over $1.34 million that would have otherwise gone to clean up Virginia’s roads.

Saturday’s cleanup was extensive, as over 15 brothers with 5 civilian volunteers came out to support this important initiative. All told, we collected 25 bags of trash and debris. Based on the county’s calculation methodology of (Hours X participants), this equates to 50 work hours of community service. Additionally, this year’s April event was significant in that it coincided with Earth Day, which happens during the month of April. As the chairperson, I want to thank all that came out to support. Lastly, as a chapter, we hope that our efforts to uplift the community through the support of this important community initiative, continues to have a lasting and positive impact on our community as a whole. 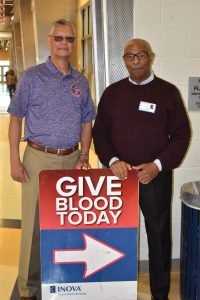 On April 3, 2019, the men of Psi Alpha Alpha (PsiAA) Chapter, Third District, Omega Psi Phi Fraternity, Inc. co-sponsored and provided operational assistance to Washington-Lee High School. This marks the second time that the chapter collaborated with Washington-Lee high school staff and students in support of this worthy and impactful event. The chapter brothers volunteered, supplied wrist band, and provided assistance wherever needed to ensure a successful event. This event serves as first of the many Psi Alpha Alpha Chapter blood drives this year to commemorate the work and spirit of our brother, the Honorable Charles Drew.

This yearly blood drive continue to be very important in the community, as it provided the students, staff, and any other volunteers an opportunity to donate blood via the INOVA Health System blood donation team for patients in need throughout the community. This service was provided free of charge and was open to the public.

This was a successful event as noted by approximately 60 donors. There were initially 70 plus student consent forms and about 10-15 teachers/staff who volunteered, in addition two PsiAA brother donating blood for an initial anticipated 70 - 80 participants.  The collected results consisted of approximately 75 blood products. The efforts will benefit an estimated 225 patients.