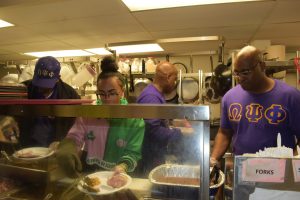 Thanksgiving is a time for families and friends to gather and celebrate the bounty of the season.  More pointedly toward the reader of this article (Omega Men), it is also a time of reflection of gratitude and thanks for God’s blessings, our family, home, careers, communities, daily comforts, and abilities to give back.

For those without a home or family, Thanksgiving can be very lonely. And for many in Fairfax County along the Route 1 corridor, the holiday is a stark reminder of their struggle with hunger.  Psi Alpha Alpha Chapter of Omega Psi Phi Fraternity Incorporated is an enduring community partner with New Hope Housing Inc. and is heavily involved in many of its volunteer programs.  The Chapter’s heartfelt act of service to New Hope Housing Inc is serving a homemade Thanksgiving meal to its homeless neighbors.  The Brothers get super excited about demonstrating compassion in action.

Brothers with lesser culinary skills rolled up their sleeves and got to work wherever needed, be it setting up tables and chairs in the dining area, washing dishes, emptying trash, or keeping the kitchen clean.  Brother Malcom Murray, our resident Dentist handed out dental packets.  Other Brothers gave spectator support to those frying the turkeys.

General feedback from our homeless neighbors and some staff was while the meal was excellent, it was the thoughtfulness and care of strangers who were volunteering their time, which made me feel loved. A lady came through the serving line said, “it was hard to believe they would give up time on their day to serve someone like me.”

Brother Antonio Coleman, Thanksgiving Committee Chairman, stated “when Brothers take time to serve a meal, offer a compassionate smile, and treat our homeless neighbors with grace and dignity, never expecting anything in return—it is a beautiful picture of how Christ loves each of us and thus, we, the men of Omega get the opportunity to love thy neighbor as thy self.”

After our homeless neighbors departed the dining area, the pots and pans were washed and put away and Brothers left the shelter, it was safe to say Thanksgiving Monday was a tremendous success.  In the spirit of Manhood, the first of four Beloved Fraternity’s Cardinal of Principals, Psi Alpha Alpha following the example of Jesus, the Chapter washed the feet of its homeless neighbors by sharing and serving a Thanksgiving meal of love.

On November 21, 2019, the men of Psi Alpha Alpha (PsiAA) Chapter, Third District, Omega Psi Phi Fraternity, Inc. joined and was honored to answer the call for service to being invited by Gum Springs to participate in the Community Thanksgiving Dinner. The event was held at the Gum Springs Community Center in the gym. The men of PsiAA provided support to the event by preparing meal plates and delivery to the table for the guests, participating at the dessert serving station, and clean-up (rolling up table and stacking chairs, etc.).

The goal for this worthwhile event was to uplift, support the community, and allow the community to share and enjoy in a traditional Thanksgiving dinner. Various community leaders were present to include but not limited to Debra Graves-Sanders (Gum Springs Community Advisory Board). The event was well attended by more than 100 community leaders, youth, and residents.

General feedback from the guests and some staff was while the meal was excellent, it was the thoughtfulness and care of strangers who were volunteering their time, which conveyed the true spirit of the season.

As the Nation and Brothers of Psi Alpha Alpha Chapter prepared for the Thanksgiving Holiday, we again committed to our annual uplifting of two important communities in Fairfax County.  The communities we supported are Gum Springs Community Center and Soldiers at Fort Belvoir, Virginia.

For well over 20 years, Psi Alpha Alpha Chapter’s Social Action Committee has provided Thanksgiving baskets in the form of gift cards to senior citizens selected by the South County Program Director, Neighborhood and Community Services, and Fort Belvoir families selected by the Chaplaincy.  This year’s project involved providing $240 in gift cards to Gum Springs Community Center and $300 in commissary gift cards to the Fort Belvoir Chapel – for a total donation of $540. 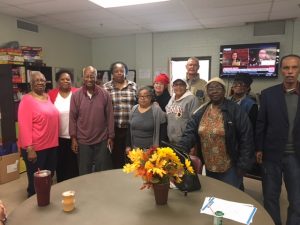 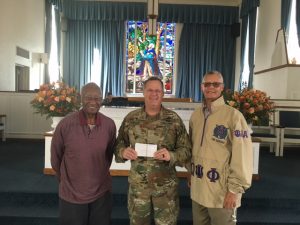 The Brothers of Psi Alpha Alpha Chapter are humbled as we uplift those less fortunate with $540 in food gift cards for Thanksgiving.  We will also be giving another $540 donation to these same organizations for Christmas. 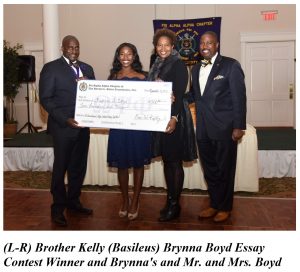 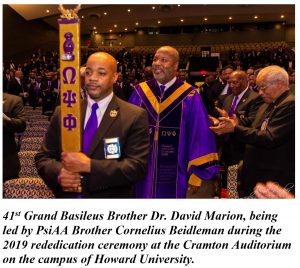 On November 9, 2019 the brothers of the Psi Alpha Alpha (PsiAA) chapter in conjunction with the Bernie L. Bates Foundation gathered to celebrate our individual and collective accomplishments from the 2018 to 2019 Omega Year.  The banquet was held at the elegant Waterford at Springfield where two hundred and ten brothers, family members, guests and friends were treated to an evening of elegance and fine dining.  Brother Marvin Chisolm served as the Achievement Week Committee Chairman and coordinated an evening of elegance and the acknowledgement of excellence. The current PsiAA Basileus Brother Eric W. Kelly, Sr. closed out the banquet with words of thanks and an empationed-plea for continued financial support of the Bernie L. Bates Foundation.  Brother Sheldon Schanck expertly served as the Master of Ceremonies and the Army Chief Information Officer, Brother Lieutenant General Bruce T. Crawford treated the audience with inspiring words on the Achievement Week theme: “Omega – Now is the Time for Serious Thinking and Impact”.

As always, we used this elegant opportunity to highlight the youth in our community.  The audience was treated to a contemporary dance performance from our 2019 Talent Hunt winner Miss Sydney Pollard and a solo song selection from Mr. Nicholas McCatty.  As a special treat, our high school essay contest winner Miss Brynna Boyd presented her thought-provoking and winning essay.

The Fairfax County Ques kicked off our Achievement Week activities on Election Day (Nov 5th) by supporting the Fraternity’s voter registration, education and mobilization call to action by supporting the polling station at the Walt Whitman Middle school in the Mount Vernon area of Alexandria.  On November 8th we conducted our first “Reading for Success” program event of the year at the Riverside elementary school; reading one book and providing twenty-five books to every 3rd grade student and later that day the chapter hosted our annual Pre-Achievement Week happy hour. The Happy Hour was a joint Northern Area II event held at Dudley's Sport and Ale.  Over 30 brothers gathered for an evening of food, fun, and fellowship. On November 14, we hosted an evening of fellowship during the Thursday night football game.   We concluded our Achievement Week activities on November 17th with brothers worshiping together and providing a donation to the Harvest Assembly Baptist Church.  After the church service, more than thirty brothers traveled to Howard University to participate in the annual rededication ceremony.  This year’s rededication was well attended and featured Brother Dr. David Marion (Grand Basileus of The Omega Psi Phi Fraternity, Inc.) was the Keynote speaker who delivered an enthusiastic, inspiring, motivating, and uplifting speech. The 2019 PsiAA Chapter Achievement Week events were a resounding success due to the effort of the committee and but more important due to the participation from the Fairfax County Ques, their families, and friends. 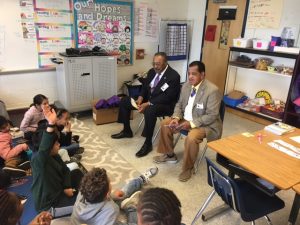 On November 8, 2018, the Brothers, known affectionately as “The Sirs,” supported six third-grade classes with a total of 125 eager students.  The program consisted of the Kickoff and First Read Aloud session.  Again, we were welcomed by Third Grade Coordinator, Third-Grade Teachers, and especially the Third-Grade Students.

The chapter’s Bernie L. Bates Foundation, Inc., provided 115 Royal Purple and Old Gold Backpacks filled with 26 books on various subjects to encourage reading and provide the students an individual reading library.  We chose “The Last Minute” by Sasha Griffin, for the first reading session and this book was added to their library.  The book tells the story of a girl name Katy who put off completing a homework assignment until, you guessed it, the last minute.

“The Sirs” are proud of the fact that we have donated “3,105 books” during our “Kickoff” and First Read Aloud session of this school year.  The brothers of Psi Alpha Alpha Chapter will continue to do their part to inspire these young readers and we look forward to the second of our four Read Aloud sessions in January 2020. 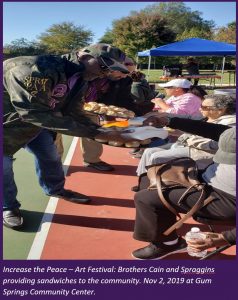 To view the event photo gallery

On the weekend of November 2, 2019, the men of Psi Alpha Alpha (PsiAA) Chapter, Third District, Omega Psi Phi Fraternity, Inc. collaborated with other Mount Vernon community leaders for the “Increase the Peace – Unite the Highway Arts Festival” event at the Gum Springs Community Center. The goal for this worthwhile event was to uplift, support the community, to improve community relations, decrease violence, and bring the community together. The event was well attended by more than 100 community leaders, youth, activists, residents and artist mixed and mingled on the beautiful fall day.

The men of PsiAA provided sandwiches and chips for 125 attendees. Additionally, the Pride of Fairfax Masons provide grilled hotdogs and hamburgers. The event also consisted of everyone connecting, discussing alternatives to violence, singing, dancing, painting, and eating.

It was a tremendously wonderful and successful event and there were several comments related to the desire to continue the event next year.