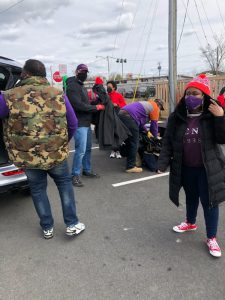 The Brothers of Psi Alpha Alpha truly lived our creed on Monday, January 18, 2021 with participation in various service projects across Northern VA in celebration of the MLK Holiday.  The brothers partnered with the Northern VA Alumnae Chapter (NoVAC) of Delta Sigma Theta Inc. at the Bailey’s Crossroads Community Shelter in Falls Church, VA to collect and distribute over 200 coats to those in need as part of the shelter’s annual Coat and Toiletry Drive.  In Old Town Alexandria, the brothers of PsiAA participated in the distribution of 500 bags of groceries as a part of Shiloh Baptist Church’s Annual Martin Luther King Jr. Day of Service.  This MLK Day was truly a “Day On” and not a “Day Off.” 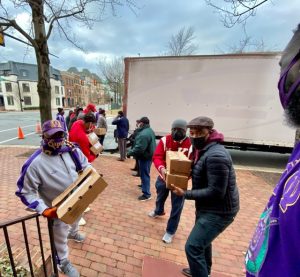 The Brothers of Psi Alpha Alpha truly lived our creed on Monday, January 18, 2021 with participation in various service projects across Northern VA in celebration of the MLK Holiday.  The brothers partnered with the members of the Northern Virginia Pan-Hellenic Council, we unloaded a semi-truck full of potatoes, onions, green vegetables, poultry, and fruit early that morning in preparation for distribution. It was all hands-on deck as we packed the groceries in bags and performed socially distanced, contactless delivery as we handed them out to members in the community as they drove into the church’s lot.  The event was also attended by Virginia Senator Mark Warner, who spent the afternoon volunteering with the church. He shared a staggering statistic that one in seven Virginians are worried about where they are going to find their next meal. He said the best way to move forward is with a simple act of kindness. This MLK Day was truly a “Day On” and not a “Day Off.”

Of note, members from the Virginia Legislative Black Caucus (VLBC) outlined its 2021 Agenda. It included the intention to ”continue to push for justice and equity” specifically by,

In addition, the VLBC outlined a number of policy areas in which they intend to effect their agenda. To include:

Well attended, the event was fast-paced and dense with information; further highlighting the importance and necessity for the chapter to remain engaged and support citizen political participation through its VREM efforts.

The Brothers of PsiAA attended and participated in the 3rd District Virtual Undergraduate Summit on January 9, 2021, hosted by the 3rd District Second Vice District Representative, Bro. Malcolm Fox.  With over 300 brothers in attendance, including 46 undergraduate brothers, the summit highlighted such topics as Legal Awareness, which went over mandatory documentation needed for facilitating public events as well as the proper utilization of fraternity logos and symbols, and the Fraternity’s Social Media Policy, which further stressed the importance of your online presence (words, pictures, and how it should not interfere with your academic or professional reputation).  The 3rd District Automation Chairman, PsiAA’s own Cornelius Beidleman (PsiAA, 2015), gave an update on the revamped 3rd District website and gave instructions to the undergraduate chapters on what would be needed to populate their sites. The summit also gave the Undergraduate Brothers the opportunity to discuss innovative ways they can continue to fundraise during the pandemic as well provided resources for scholarships, internships, and post-graduation employment.  Overall, the brothers in attendance were appreciative of the amount of relevant information that came out of the summit and lauded it for Bro. Fox’s leadership, attention to detail and overall time efficiency.