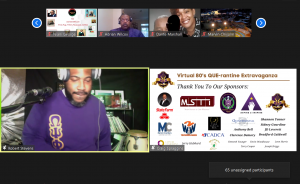 On April 17, 2021, the Bernie L. Bates Foundation, Inc sponsored the Virtual 80s QUE-Rantine Extravaganza. This progressive, virtual social event was hosted by the Brothers of Psi Alpha Alpha Chapter of Omega Psi Phi Fraternity, Inc. This was a first-of-its-kind Virtual Social Event that featured not only the now common awesome DJ in virtual space, but this event also featured six additional breakout rooms offering a variety of options for the participants.

“If we are bound to improve, we need not trouble to improve. The pure doctrine of progress is the best of all reasons for not being a progressive.”
G.K. Chesterton, Orthodoxy

The event was attended by more than 150 patrons. It was designed to appeal to a diverse clientele by providing a variety of activities in several breakout rooms. It also featured an exhibit hall with several vendors to display their goods and services and potentially make some sales and foster relationships.  The music in the main room was provided by DJ Rob Stacks, a brother of Omega, who pledged at Tau Lambda Chapter during the Spring of 2001. He played a mix of 80s and 90s hip hop and R&B tunes while providing excitement with his personal touch.  For a more mellow vibe, Brother Keith Wilson (Lambda Gamma, Spring 1980) from Kool K Entertainment provided his smooth jazz saxophone flavor in a separate breakout room.  Psi Alpha Alpha’s own in-house chef, Julian Gudger (Psi Alpha Alpha, 2000) provided an interactive cooking demonstration instructing patrons how to properly cook bacon-wrapped dates, chicken tenders with honey mustard sauce, and kettle popcorn.  To work off that delicious meal, patrons could switch to another breakout room for an energetic Zumba class, led by Rosa Seward from Brickhouse Fitness.  Bro. Ikey Staton (Gamma Pi, Fall 2004) from Southern Sticks & Smoke, and Dyane Johnson from Petworth Cigars, held separate “Cigar 101” sessions that showcased their knowledge of cigar brands and flavors, and accessories. This also included a tour of the Petworth Lounge and education on cigar etiquette, drink pairing, and basic cigar knowledge (selecting the right cigar, cutting vs. punching, lighting cigars, etc.).  Patrons had access to two Show Biz Production’s Casino game breakout rooms during the event, where they could try their hand at the Blackjack tables. The evening also featured two 50/50 Raffles that kept all on edge as the drawings were being announced. All event sponsors were prominently displayed throughout the night on our digital Sponsorship billboard. In addition, all Top sponsors were provided a 30 second advertisement video which was played during the event. Overall, the event was a great success that set the bar for virtual events where only Psi Alpha Alpha Chapter has ascended.